The Vedic Traditions / Values in relation to Girls / Women and their Empowerment . 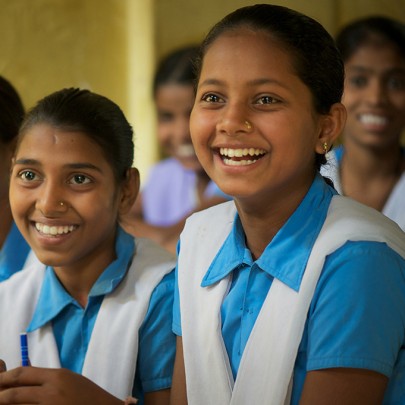 The Vedas ( वेद véda, "knowledge") are a large body of texts originating in ancient India. Composed in Vedic Sanskrit, the texts constitute the oldest layer of Sanskrit literature and the oldest scriptures .

There are four Vedas: the Rigveda, the Yajurveda, the Samaveda and the Atharvaveda.

The Vedic tradition has held a high regard for the qualities of women, and has retained the greatest respect within its tradition throughout the many years of Vedic culture, women have always been given the highest level of respect and freedom, but also protection and safety. There is a Vedic saying, "Where women are worshiped, there the gods dwell." Or where the women are happy, there will be prosperity. In fact the direct quotes from the Manu-samhita explains as follows:

"Women must be honored and adorned by their fathers, brothers, husbands, and brothers‑in‑law, who desire their own welfare. Where women are honored, there the gods are pleased; but where they are not honored, no sacred rite yields rewards. Where the female relations live in grief, the family soon wholly perishes; but that family where they are not unhappy ever prospers. The houses on which female relations, not being duly honored, pronounce a curse, perish completely, as if destroyed by magic. Hence men who seek (their own) welfare, should always honor women on holidays and festivals with (gifts of) ornaments, clothes and (dainty) food." (Manu Smriti III.55-59)

In a similar way that would foretell the future if women are no longer honored, Grandfather Bhishma explained: "O ruler of the earth (Yuddhisthira) the lineage in which daughters and the daughters-in-law are saddened by ill treatment, that lineage is destroyed. When out of their grief these women curse these households, such households lose their charm, prosperity and happiness." (Mahabharata, Anushashanparva, 12.14)

Furthermore, in the Vedas, when a woman is invited into the family through marriage, she enters "as a river enters the sea" and "to rule there along with her husband, as a queen, over the other members of the family." (Atharva-Veda 14.1.43-44) This kind of equality is rarely found in any other religious scripture. Plus, a woman who is devoted to God is more highly regarded than a man who has no such devotion, as found in the Rig-Veda: "Yea, many a woman is more firm and better than the man who turns away from Gods, and offers not." (Rig-Veda, 5.61.6)

Women are accorded the greatest respect in Vedas. Still, ignorant semi-literate communists keep propagating the false propaganda that Vedas demean women. Presented here are verses from Vedas obtained from texts of most learned scholars in this field to establish the truth.......

Rigevda contains several Suktas containing description of Usha as a God. This Usha is representation of an ideal woman. Please refer “Usha Devata” by Pt Sri Pad Damodar Satvalekar as part of “Simple Translation of Rigveda (Rigved ka subodh bhashya)”. Page 121 to 147 for summary of all such verses spread across entire Rigveda. In summary: It was an honour for all the students to receive the course completion certificate from His Grace Vishwarup Das .(Dr. Vivekanand Shanbhag).